Restored and sold in February 2019 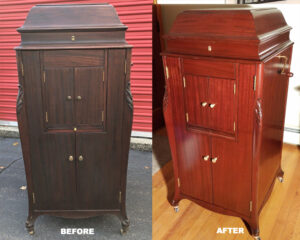 The VV-XVI or “Victrola the Sixteenth” was the original internal-horn Victrola; introduced in 1906, it remained the company’s premiere model for nearly 15 years. The XVI created a sensation when it first appeared at dealer showrooms, as the ungainly phonograph horn was now hidden inside the cabinet rather than being mounted on top of the machine. “Tone Doors” in the front allowed the user to control the sound volume, and the lid could be closed to lower the noise emanating from the vibrating sound-box and motor. Storage for record albums was provided in the bottom portion of the cabinet. Priced at a whopping $200.00 (which equates to over $5,128 in today’s money), it was intended for wealthy buyers who desired a ‘state of the art’ phonograph integrated into an elegant piece of furniture.

The internal horn design configuration was soon adopted by numerous lower-cost Victrola models; when Victor’s patents began to expire in 1918, this concept was copied by virtually all competing phonograph companies.  Eliminating the large external horn from view made the “Victrola” a popular commodity for millions of homes around the world.  By the dawn of the 1920’s, over 5,000,000 phonographs with this internal-horn design would be produced by Victor.

By the summer of 1909, the new Victrola was selling at a tremendous pace and provided immense profit for the company. A new cabinet design was then introduced, which was larger than the previous model; the filigree trim was eliminated, and ornate hand-carved corner posts appeared. This update was also denoted by a “B” suffix after the serial number, and a change was made to the under-lid decal from “Victor-Victrola” to just “Victrola. Continuing improvements to the motor and hardware were made, and these changes were indicated by the inclusion of a “C” or “D” suffix. Approximately 47,000 of these machines were made between the summer of 1909 and the fall of 1912, when yet another updated cabinet was introduced. 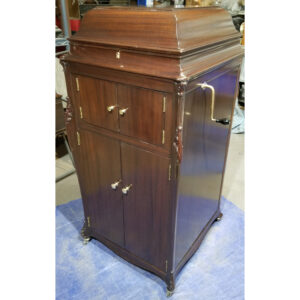 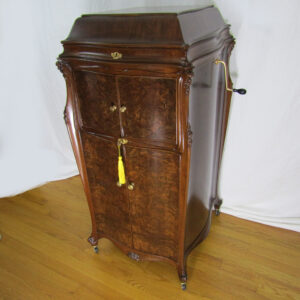 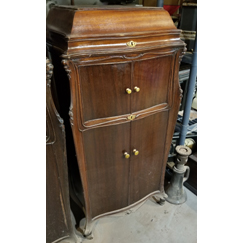 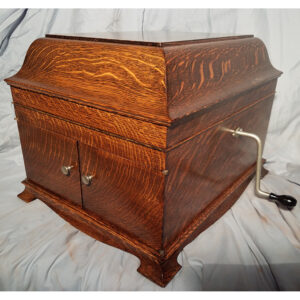