There were nearly 200 phonograph manufacturers in the United States in 1919. The demand for phonographs and records exceeded the supply in the 1910s.

Many companies were local, and distribution was limited. Some, such as Cheney and Star, distributed their phonographs nationally. Many department stores, furniture, music, and piano stores contracted with small manufacturers to create phonographs for sale under their brand name.

Many off-brand manufacturers made only the phonograph cabinets. Motors, reproducers, tonearms, and other hardware were purchased from supply houses such as the Arrow Motor Company of Newark (New Jersey), Otto Heineman Phonograph Supply Company in New York, and René Manufacturing Company in Hillsdale (New Jersey).

Most off-brand phonographs used “universal” tonearms that could play either lateral or vertically cut records. Most used a mica diaphragm in the reproducer. Many of the tonearms and reproducers were made from pot metal to reduce the expense of manufacture. They proved to be brittle and subject to breakage.

By 1919, most cabinets had a veneer surface. High quality three to five-ply veneers were featured. Birch, gum, mahogany, oak, and walnut were used.

By 1921, the phonograph boom was over. Sales declined over 38 percent from 1919. The market had been oversold. Within a decade, most of the over 400 off-brand phonograph manufacturers were forced to close their doors. Those that did survive met their demise in the Depression. 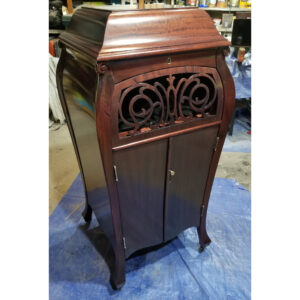