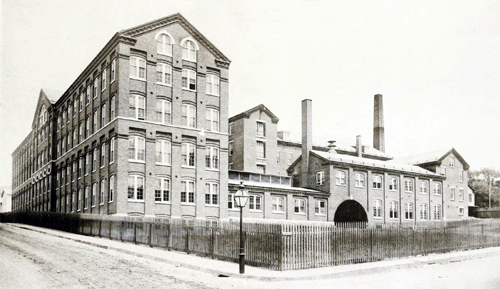 The Waterbury Clock Company is a watch manufacturing company that was founded in 1857. It was a subsidiary of Benedict & Burnham, a manufacturer of brass sheeting and buttons, among other brass products.

By the 1840s, millions of brass clock movements were used by people, and they were also manufactured by various companies like Ansonia Clock Company, Seth Thomas, and Wm. L. Gilbert Clock Co.

Since the brass demand was so high, it was common for the brass manufacturer like Benedict & Burnham to grow their business by developing clock movements. Therefore, this made them control the entire supply chain from the raw materials to finished products.

They first entered the clock business through a joint venture with the clockmaker Chauncey Jerome, his son Samuel, and Benedict & Burnham’s directors from 1793 to 1868. The business was incorporated in 1850 and was given the name Jerome Manufacturing Company. It was established in New Haven, Connecticut, where the Jeromes used to manufacture clocks.

However, later on in 1853, the Jeromes went on to buy the Benedict & Burnham investors, and the company made a 21 percent profit over the initial invested capital. Benedict & Burnham went to start their own clock manufacturing company in Waterbury, Connecticut.

In 1855, they hired Noble Jerome, the younger son of Chauncey Jerome. They set up a plant to manufacture brass movement in a building just right next to the main brass manufacturing plant.

The Jerome Manufacturing Company went bankrupt in 1856. Benedict & Burnham offered Chauncey Jerome a lease on a certain building near the Waterbury Factory to make cases that would house Benedict & Burnham’s produced movements.

However, after just 8 months, Jerome left the case making the operation taken over by Edward Church, his foreman. On March 5th, 1857, the formal incorporation of the Waterbury Clock Company took place, and G.W Burnham, together with Aaron Benedict, became the largest shareholders, making them own over one-third of the 2,400 shares among them.

Many of the other shareholders were also part of the Benedict & Burnham Company. Noble Jerome was hired and made the chief foreman of movement production. However, there was a tragedy in 1861 as Noble Jerome died from an accident when a balustrade fell from a building that he was passing by.

He was later replaced by the son of Eli Terry, a popular clockmaker. After the end of the American Civil War, the Waterbury Clock Company developed two factories specifically for building clock cases. But misfortune struck them again as the factories were destroyed by fire, although it is something that used to happen a lot during that era.

The two factories were later rebuilt, and from that point, the business took off, with the first listing of their clock published in 1867. It was at a catalog distributed by a New York sales agency known as the American Clock Company, representing many other clock manufacturers.

From 1869 to June 1870, the business was booming, and the company manufactured 96,000 movements, 82,000 completed clocks, and 85,000 cases. The distribution of Waterbury Clocks happened by 1875 through sales offices in San Francisco and Chicago.

The Waterbury Company published its catalog in 1881 that was exclusively listed in clocks, and it offered 94 different varieties. The catalog expanded in 1891 up to 304 models and 175 pages. 1892 saw the company forming a subsidiary called the Waterbury Watch Company, and this new division started to produce inexpensive low-end pocket watches for the Ingersoll Company, with each selling for a dollar.

These watches were branded with the Ingersoll name, and they became quite profitable. From 1896 to 1916, they sold over 40 million of these watches at $1 each. By the turn of the century, the Waterbury company was closing around 600,000 watches and clocks monthly. They had a workforce of about 3,000 people.

The Waterbury continued manufacturing watches and clocks, and today it’s known as the Timex Group USA, Inc. It became insolvent in 1944, but it was acquired by Timex Group B.V. and renamed the Timex Group USA. It currently has subsidiaries like the Opex S.A., Timex Canada, and Sequel AG.