Seth Thomas Clock Company was one of the most prolific and long lived clock companies. The quality of their products was always maintained at an above average level. Seth Thomas must have 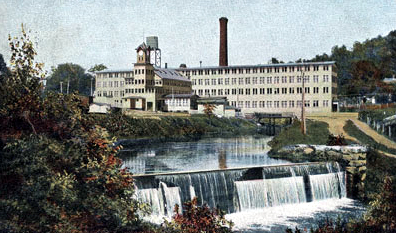 sold many clocks in the Lafayette, Indiana area, for out of all the antique clocks we repair, about 40% are made by Seth Thomas.

Many American clock factories in the 19th century suffered factory fires but Seth Thomas was fortunate in this respect. Through conservative growth and taking advantage of the new ideas of others, Seth Thomas was able to enjoy financial stability, whereas many other companies faced financial difficulties.

Seth Thomas was born in Wolcott, Connecticut in 1785, went to work for clockmaker Eli Terry in 1807, bought out Terry’s factory (together with Silas Hoadley) in 1810, and in December 1813 bought out Heman Clark’s clockmaking business in Plymouth Hollow.

Thomas continued Clark’s wooden movement tall clock production, and about 1817 began making the wooden movement shelf clock. These were cased in pillar and scroll cases until 1830, when the bronze looking glass and other styles became popular. In 1842, brass movements were introduced, and first cased in the popular O.G. case (which was made until 1913). Wood movements were phased out in 1845. In 1853 Mr. Thomas incorporated the Seth Thomas Clock Company, so that the business would outlive him. Mr. Thomas died in 1859, and Plymouth Hollow was renamed Thomaston in his honor in 1865.

Many Seth Thomas clocks from 1881 to 1918 have a date code stamped in ink on the case back or bottom. Usually, the year is done in reverse, followed by a letter A—L representing the month. For example, April 1897 would appear as 7981 D.

In 1968, General Time was bought by Talley Industries, and in 1979 the headquarters was moved to Norcross, GA.

In June 2001 General Time announced that it was closing its entire operation. The Colibri Group acquired Seth Thomas. The NAWCC (the National Association of Watch and Clock collectors) purchased from Seth Thomas their collection of historical records, drawings, photographs, advertisements and documents.