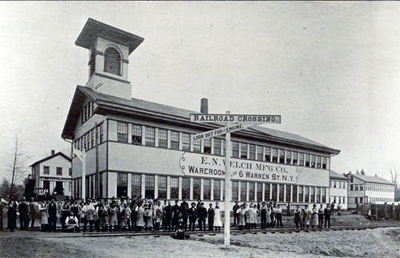 The E. N. Welch Manufacturing Company was a joint stock corporation formed July 6, 1864 to succeed an older private firm making clocks under the name of E. N. Welch. Elisha N. Welch (1809×1887) had been making clocks at a factory site on East Main Street at Forestville, Conn. since taking over the bankrupt business of J. C. Brown about 1856.

A new movement shop was fitted up in 1869, adding to the two factories already in use by the firm. Between 1868 and 1884, a subsidiary firm called Welch, Spring & Company was formed to produce a more expensive line of clocks. This firm will be spoken of in more detail elsewhere. The Welch firm was well known for its handsome rosewood cases, though in 1885, with changing styles in furniture, the surviving firm began to introduce new models with solid walnut cases and discontinued some of the older rosewood veneered cases.

Elisha Welch was enamored of a lovely (but very liberal-thinking) diva of the day from Spain by the name of Adelina Patti. He named perhaps his best quality movement after her, called the “Patti” movement. Clocks with this movement are highly sought by serious collectors.

After the death of Elisha Welch in 1887, the firm began to decline fast, selling off some of its assets and issuing new stock to raise capital. A new line of clocks was introduced for the year 1893, which appeared to be of much cheaper quality than their discounted line. In May of that year the factory was closed down and a receiver was appointed who spent nearly two years selling off stock and settling the debts of the firm. It was not for another year that the firm resumed production.

In 1899, two fires, one in March and a second in December reduced most of the Welch manufacturing complex to ashes. A new brick factory was built and occupied and by April, 1900, they could not meet their liabilities with the interruption in their cash flow. Members of the wealthy Sessions family were busy at this time buying out former stockholders and eventually took control of the firm in 1902 and changed the name to the Sessions Clock Company on January 9, 1903.