The Ansonia Clock Company did not have its roots in Ansonia, the Connecticut town after which it was named, but some 35 miles northeast in the great clockmaking town of Bristol. In 1841, 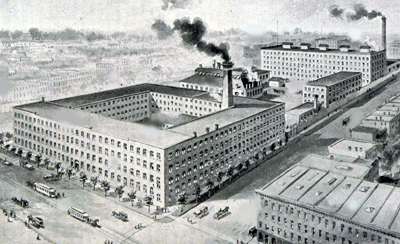 Theodore Terry, nephew of Eli Terry the man who had started the manufacture of inexpensive clocks in the first decade of the 19th century, formed a partnership with one Franklin C. Andrews. The new firm of Terry & Andrews was to tool up and manufacture inexpensive brass clocks.

On August 13, 1841, Theodore Terry of Bristol and Franklin C. Andrews of New York purchased two parcels of land, one noted “…as being the same ground my sawmill stood & one other building that was burnt… ” from Theodore’s father, retired clockmaker Samuel Terry, for $3,000.00. Samuel Terry extended a mortgage for the entire property to Terry & Andrews which was payable ten years from date, only interest due annually. III A history of clockmaking published in the Bristol Herald in 1890 noted “…In 1841, the factory built by Samuel Terry near the rolling mill dam, was burned while occupied by Ray & Carpenter making ‘OG’ cases and Terry & Andrews making movements. Mr. Terry built up the shop again and it was occupied by Theodore Terry and Franklin Andrews, under the company name of Terry & Andrews.”

During the remainder of the 1840’s the Terry & Andrews business prospered and 30 hour and 8 day spring driven models were added to the line of 30-hour weight-driven clocks. After the destruction of the Chauncey Jerome factory in 1845 and Jerome’s subsequent removal of the remainder of his business to New Haven, Conn., Terry & Andrews became the largest clock manufacturers in Bristol. In June of 1850, they reported $50,000 invested in capital, were employing 58 hands and had produced about 25,000 clocks, valued at $75,000, in the previous 12 months. One report on Bristol manufacturers in 1850 noted Terry & Andrews “are called as safe a firm as any in town, pay well, you can trust them all they ask for. . .”

By 1850, Terry & Andrews was annually using 58 tons of brass, so it is not surprising that Theodore Terry was one of several Bristol clockmakers who were incorporators of the Bristol Brass & Clock Company in April, 1850 and subscribed for 266 shares, an investment of $6,650.00. However, about this time Anson G. Phelps, a wealthy industrialist from New York who operated large foundry operations at Birmingham (now Derby), CT, persuaded Terry & Andrews to leave Bristol and become allies with his foundry operations.

Terry & Andrews paid up their mortgage to Samuel Terry on April 13, 1850 and on the following May 1lth sold half interest in their firm to Anson G. Phelps for $7,200 Two months later Theodore Terry sold his entire interest in the Bristol Brass & Clock Company, probably labeling him “traitor” to its others investors.

On May 7,1850, Anson G. Phelps, Theodore Terry and Franklin C. Andrews formed a joint stock corporation known as the “Ansonia Clock Company” for the manufacture and sale of clocks, movements and related wares. Some $100,000 capital was authorized with 4,000 shares sold at $25 each. Phelps held controlling interest with 1,334 shares while Terry and Andrews held 1,333 each. Theodore Terry was chosen President and his son Hubbell P. Terry became secretary. The new location, Ansonia, was a village in the town of Derby, CT which Anson Phelps had named after himself.

The firm eventually utilized a two-story factory for the clock business which was in use by January of 1851, though Phelps did not sell the property to the company and lease them the water rights until April 12th of that year. This land was noted as being on the northwest comer of a lot on which also stood a stone factory owned by Phelps, which was used by the Jerome Manufacturing Company of New Haven.

Franklin Andrews sold out all but one of his shares in the business on December 20, 1851 and even sold that single share to H P. Terry on November 18,1852. He remained at Jersey City, NJ until his death in January of 1881 and operated a New York clock store for many years.

With a transfer by James B. Stokes of his 1,000 shares of clock company stock to Phelps, Dodge & Company during January of 1845, the Phelps firm became the controlling stockholder with 2,000 shares while Theodore Terry held 1,999 and Hubbell P. Terry held one. 1151 Ansonia’s business apparently proceeded well until about November of 1854, when the factory was reduced to ashes at a loss estimated at $120,000. A meeting of Directors was held at Bridgeport, CT on November 15,1854, at which time the following resolution was passed:

“That in consequence of the destruction of the Building by fire it has been agreed to sell the Land & ruins to A. G. Phelps [Jr.], Win. E. Dodge, Daniel James, James Stokes, Wm. E. Downs, Jr. & D. Willis James for the sum of Eight Thousand Dollars and that the President be authorized to make and execute a deed of the same.”

The above resolution and sale on November 16, 1854 effectively ended the original Ansonia Clock Company and sold the balance of the firm to the Directors of Phelps, Dodge & Company. Theodore Terry thereafter became involved with P. T. Barnum, the great showman, in a clock venture called the Terry & Barnum Manufacturing Company until its bankruptcy in March of 1856. He also continued his clockmaking activities at Terryville, CT after 1855 for a few years under his own name. He thereafter went to Pennsylvania for a few years and became involved in the oil business but returned to Connecticut by 1864 and died June 18, 1881 at New Haven.

For the 15 years following the 1854 fire, the history of clock manufacturing at Ansonia is more difficult to follow. No official clock company was formed during these years though the parent firm of Phelps, Dodge & Company continued to manufacture clock movements and sell some cased clocks, but in relatively small numbers. Clocks from this period are rarely seen today, but are usually labeled “Ansonia Brass Company” often showing the factory, which was destroyed in 1854 on the labels. A few clocks were also labeled “Ansonia Brass & Battery Company” during this period. The Ansonia Brass & Battery Mill, another operation of Phelps, Dodge & Company, reported in June of 1860 the manufacture of 22,000 clock movements, but only 2,000 finished clocks during the previous 12 months. They were primarily a movement supplier to the trade.

However, the clockmaking business became a major operation with the reorganization of the Ansonia Brass & Battery Company as the Ansonia Brass & Copper Company on February 11, 1869. Fourteen months later, 150 were employed and some 90,000 pounds of brass had been utilized between June of 1869 and June 1870 to produce 83,503 clocks valued at $200,000. Clocks during this period were labeled “Ansonia Bras & Copper Company”, a name more commonly seen as the production of finished clocks was much greater during this period than the previous ones (1854×69). The earliest price list of this firm, now known, is dated January 1, 1873 and offers 45 models including 4 timepieces, 12 lever wall clocks, 9 one day and 8 eight-day spring-driven mantel clocks, 5 weight driven shelf clocks and 7 office clocks. Fourteen different movements were being produced.

After eight years, another reorganization took place separating the brass mills and the clockmaking operation. On December 21, 1877, a joint stock corporation was formed at New York City adopting the original name, “Ansonia Clock Company”. The incorporators were primarily the officers of Phelps, Dodge & Company, but one important exception was Henry J. Davies of Brooklyn, a man whose influence and leadership would be strongly felt in coming years.

Little personal information is known about Henry J. Davies, but he had been involved in clockmaking pursuits in New York for some years. He was obviously an inventor and case designer and became President of the firm while his brother, Walter, became general superintendent of the factory. Henry Davies may have been largely responsible for the figurine clocks, swing clocks and other unusual novelties for which the Ansonia firm is highly regarded by clock collectors.

In April of 1879, a large factory was commenced at Brooklyn, New York and its new machinery installed in the spring of 1880. One can only assume the choice of Brooklyn had something to do with the fact that Henry Davies lived at that place. Brooklyn soon became the major manufacturing site, though operations at Ansonia were not totally shut down until about 1883.

However, it was only a few months after this reporting on October 27, 1880, the Brooklyn factory was totally destroyed by fire. The Hartford Times claimed the fire was caused by an explosion of leaking gas and noted the loss at $750,000 with only $250,000 insured. The New York Times reported:

Despite the setback, the firm immediately erected a new building and within a few years the entire clockmaking operation was centered at Brooklyn. Annual statements during the 1880’s show the firm remained financially strong. By 1886, they reported $600,000 worth of stock on hand, a quarter of a million dollars due them for sales and no debts.

By January of 1883, Ansonia had sales offices in New York, Chicago and London. By 1886, they offered 228 clocks and by 1914, this number had grown to almost 450! They had become especially known for their iron-cased clocks, often with white metal figurines, clocks with imported china cases and crystal regulators. Non-jeweled watches were added to their line in 1904 and produced an estimated 10 million of these by 1929. By 1914, they had agents in Australia, New Zealand, Japan, China, India and exported large quantities of clocks to these and eighteen other countries.

During World War I, few trade materials seem to have been published, but in 1920, the catalog shows their offerings had greatly changed in numbers and quality. The items, which formerly had comprised most of their catalog such as black iron clocks, figurine clocks and china-cased clocks, had all been discontinued. Only 136 clock and 9 watch models were offered in 1920, and by 1927, the number had dropped to 47 clocks and 3 watches.

Since the decline seems greatest between 1915 and 1920. It is significant that their decline occurred prior to the Great Depression and, in fact the sale of the company took place some months prior to the stock market crash.

By the mid-1920s, the company was definitely in trouble. In July of 1926, they sold their five-story Brooklyn warehouse. The end culminated with the sale of the firm to Soviet Russia’s Amtorg Trading Corporation. This sale, along with that of Canton, Ohio’s Dueber-Hampden Watch Company, was noted in the New York Times on September 10, 1929. Some workmen from both Canton and Brooklyn went to Russia for up to 18 months to get the machinery in operation and train Russian workers. These operations became the nucleus of Moscow’s factories No. 1 and No. 2, both established in 1930. They were in full operation in 1956 and are likely so today as Russia is still producing mechanical timekeepers.

Apparently, the plans for a 1948 re-entry of Ansonia clocks to the marketplace did not materialize, though the trademark has been used in the last decade by a Linwood, Washington sales operation on clocks imported.